I wasn’t quite sure what to make of it myself, but this is where I was the other day.

Am still at the lake and slowly getting a little better at yoga and Spanish.  The other afternoon I took a boat across the lake to the town of Santiago Atitlán, to see for myself what people had mentioned…….A drinking, smoking worship of a saint? Didn’t sound like something that could be real so I was curious.

The ‘saint’ in question is known as Maximón and is worshipped in various forms by people in several towns in the highlands of Western Guatemala. Wiki tells me that ” The legend goes that one day while the village men were off working in the fields, Maximón slept with all of their wives (at once). When they returned, they became so enraged they cut off his arms and legs (this is why most effigies of Maximón are short, often without arms). Somehow he became a god following this, perhaps he was possessed by the god prior”

Maximón is represented by an effigy which resides in a different house each year, being moved in a procession during Holy Week. You can see from the video his shrine is attended by two people who keep it in order and pass offerings from visitors to the effigy. In our case it was cigarettes and hard cash. Liquor is also a popular choice and we did see the effigy being offered some, when it finished his cigarette!

A more detailed background and explanation can be found here: http://www.santiagoatitlan.com/Religion/Maximon/maximon.html

Here’s some photos I also took. Did I forget to mention there was a coffin in the room also? 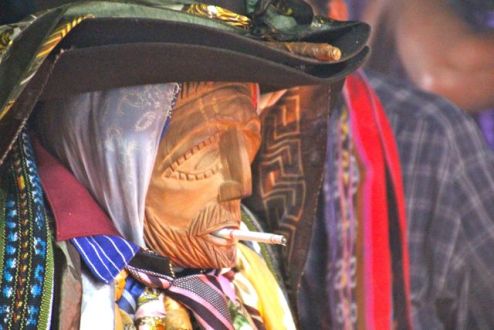 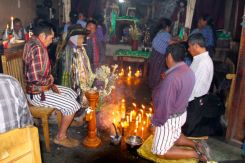 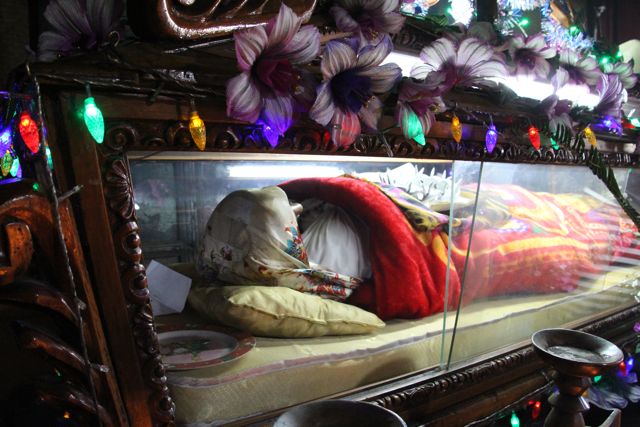 2 thoughts on “What do you make of this?”