Have been using local buses mostly to travel around mainland Belize. One of the days I was waiting in the bus station in Dangriga, the largest town in Southern Belize, when I was approached by an older man

Where are you from? He asked as an opener

Ireland, I replied
Our priest here is from Ireland. Man, all his sermons are about his chickens.
Oh……, I managed to reply.
The Catholic Church is in the dark ages man….the country is going down and the man cannot find any inspiration in the entire bible, Old or New Testament. We listen for an hour about the chickens in his yard. I wrote him up to the bishop, but think he’s an uncle to our priest.  He’s English. Colonials man, we been independent for years and they treat us like colonials……….The Angelicans are on the way up, they got a woman pastor here …..”
And on it went.
Later when I got on the bus and we were on the move I looked up and spotted the t-shirt the conductor was wearing, alongside the beads………
You couldn’t make it up. It’s exactly these random moments that remind me why I love travel 🙂 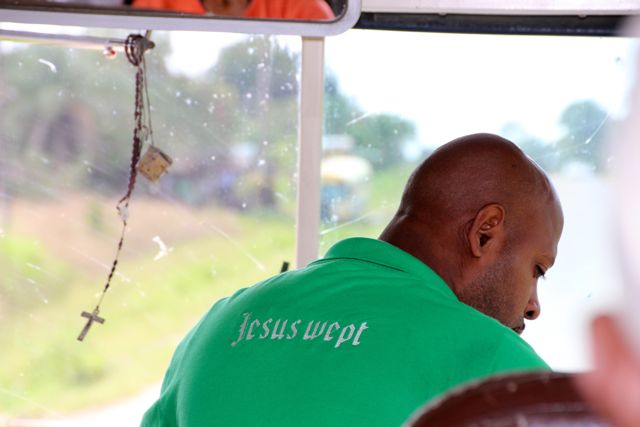