On any given day there is a course or workshop running here in San Marcos but at the weekend, it was taken to a new level with The Festival of Consciousness.

The what? Yes, you read correctly, The Festival of Consciousness. When I got here a few weeks ago I saw the signs around town for the festival. ” Oh some of that looks interesting” I thought, “but there’s no way I will still be here” Ha, well that was wrong!

All up there were 60 workshops running in 2 hour slots across 2 days. So some hard choices had to be made. Unfortunately I missed many that I would have liked to attend and some I was simply curious about. For example what  would “Astrology and the Sacred Feminine” have been or I have no clue what Cranial Sacral therapy is so the intro class could have been interesting. There was also lots of dance workshops, from ecstatic to twerking, meditation, permaculture, yoga, alternative power sources, recycling…..the list goes on.

As I have been doing so much yoga lately, I chose some other things I am less familiar with. In fact I kicked off Saturday with a talk on metaphysics and holistic healing! What do you mean I am not my body? Illness is a good thing?  Some very thought-provoking ideas came through the lecture. Guess that’s the point, not to come away knowing much, but to shine a light on something new. From there it was a run to the Seven Stars temple for Tai Chi. 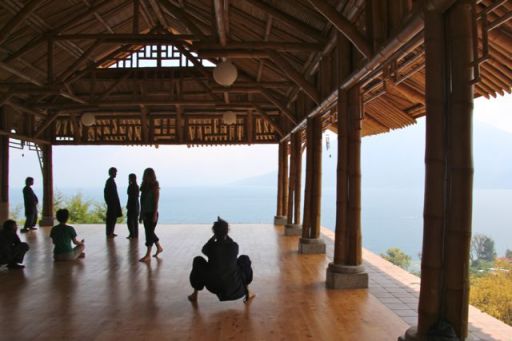 This place is simply magical, perched high on the mountain, overlooking the lake. We were taken through a practice, with the wind blowing across the room. Not a sound, bar some wind chimes. 40 newbies trying to follow the moves, concentrating and at times thinking we were actually graceful!

I wont labour all the classes I attended, except to say I chose a few others that were around food. I have realised that I don’t know a whole lot about what I am eating! Yes I know what I like and how to cook it, but I haven’t given much consideration to where it comes from. Great to take the time to listen to some people who are knowledgeable in this space. Some of the food classes were, Food for Health, Food as Medicine, where I liked this soundbite;

That class went further than ginger and lemon for a sore throat, urine therapy was introduced within minutes of starting, so no wonder this was the sign at the entrance! (Urine therapy is drinking your own pee daily….make up your own mind on that)

A favourite class was Wild Fermentation – now I finally understand the attraction of sour dough. There’s a really interesting company here called Love Probiotics with a great range of products doing interesting things in the fermentation space.  This class had the largest participation (other than the sex magic lecture! ) as I think there’s a lot of hobby brewers in town. Beer  and sex, some things are the same all over the world!

All the teachers gave their time for free in exchange for free entrance for them to the rest of the program. It always  felt you were being spoken to by a knowledgeable enthusiast with a passion for their area. The only downside was missing the classes that clashed with these.

Maybe I will just have to come back next year for those!