Spontaneity, one of the many benefits of having free time.

This can manifest itself in many ways, such as rambling around a new town without a plan, map or agenda! One such day in Prague, I happened to stumble upon the box office for the National Theatre. After a few minutes spent checking out what was on I was the owner of a last minute ticket for the ballet that night. How great my first time to the ballet.

The ballet was called  “Solo for Three” (Sólo pro tři)  inspired by the lives and songs of three singer-poets of the 1960’s and 1970’s – Jacques Brel, Vladimir Vysotsky and Karel Kryl. One of the songs I recognised and I haven’t been able to get it out of my head since, it even makes me want to dance.   Here’s a link to the original song (not as performed in the ballet)  http://www.youtube.com/watch?v=ZkZ_ihsn404

Having not been to a ballet previously, I don’t have anything to compare it to, all I know is that I thought it was superb and had a fabulous time. The performance left a lasting impression, so much so that I tried to recreate some of the ballet moves much later that night in another establishment – but that’s another story!

Below are some pictures I took of The National Theatre, which opened for the first time on June 11, 1881. 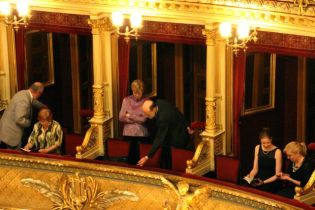 Moonlight on the National Theatre