Chichén Itzá is apparently one of the most famous and  extensively restored and by far the most visited of all Maya sites, yet up until a few weeks ago I knew nothing about it and I am still learning!

Spent the day here recently roaming around the the site and trying to imagine what it might have been like, in it’s prime.  It’s believed to have been established around 300 AD, and began to flourish in the Terminal Classic period (between 800 and 925 AD); the rest of its history, however, as well as the roots of the Itzá clan that consolidated power in the peninsula here after 925, remain hotly disputed.

Here are some of the pictures I took on the day. The sites structures are mainly restricted from walking though but I could get a sense of the place, I have added some of the text from the guide book below to help explain 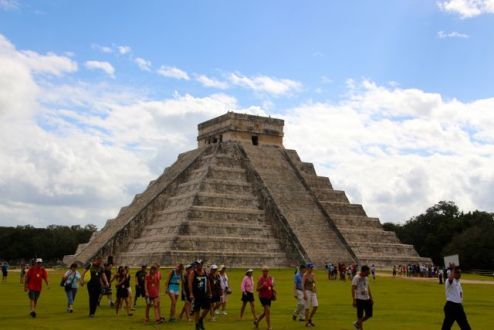 El Castillo, and yet another tour group 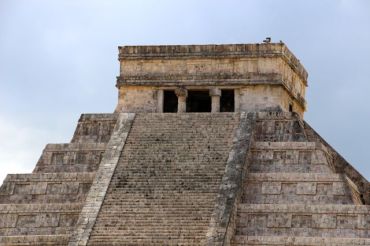 This structure sits alone in the centre of a great grassy plaza. It is a simple, relatively unadorned square building, with a monumental stairway ascending each face (though only two are restored), rising in nine receding terraces to a temple at the top. The simplicity is deceptive, however, as the building is in fact the Maya calendar rendered in stone: each staircase has 91 steps, which, added to the single step at the main entrance to the temple, amounts to 365; other numbers relevant to the calendar recur throughout the construction. Most remarkably, near sunset on the spring and autumn equinoxes, the great serpents’ heads at the foot of the main staircase are joined to their tails (at the top of the building) by an undulating body of shadow – an event that lasts just a few hours and draws spectators, and awed worshippers, by the thousands. Inside El Castillo an earlier pyramid survives almost intact, and in the temple’s inner sanctuary, archeologists discovered one of the greatest treasures at the site: an altar, or perhaps a throne, in the form of a jaguar, painted bright red and inset with jade “spots” and eyes. 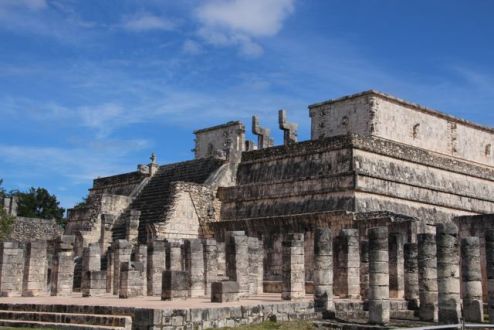 The Templo de los Guerreros (Temple of the Warriors), lined on two sides by the Grupo de las Mil Columnas (Group of the Thousand Columns), forms the eastern edge of the plaza. These are the structures that most recall the great Toltec site of Tula, both in design and in detail – in particular the colonnaded courtyard (which would have been roofed with some form of thatch) and the use of Atlantean columns representing battle-dressed warriors, their arms raised above their heads. 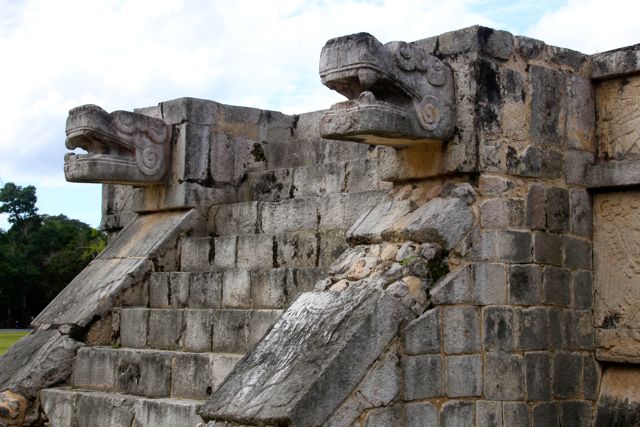 A raised block with a stairway up each side guarded by feathered serpents. Here, rites associated with Quetzalcoatl when he took the form of Venus, the morning star, would have been carried out. Slightly smaller, but otherwise identical in design, the adjacent Plataforma de Águilas y Jaguares features reliefs of eagles and jaguars holding human hearts. Human sacrifices may have been carried out here, judging by the proximity of a third platform, the Tzompantli, where victims’ heads likely hung on display. This is carved on every side with grotesque grinning stone skulls 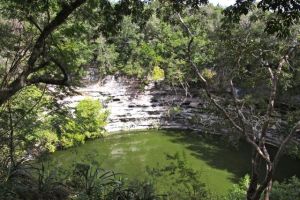 The Cenote Sagrado lies at the end of the sacbé that leads about 300m off the north side of the plaza. It’s an almost perfectly round hole in the limestone bedrock, some 60m in diameter and more than 30m deep, the bottom third full of water. It was thanks to this natural well (and perhaps another in the southern half of the site) that the city could survive at all, and it gives Chichén Itzá its name (literally “at the edge of the well of the Itzá”). The well was regarded as a portal to the underworld, called Xibalba, and the Maya threw in offerings such as statues, jade and engraved metal disks (a few of them gold), as well as human sacrifices – all of them boys, recent research has shown. People who were thrown in and survived  were believed to have prophetic powers, having spoken with the gods.