Today was a driving day, about 600km in fact along the Great Australian Bight but that doesn’t mean it was dull.

The first thing to make me smile was when I stopped at one of the lookouts to view the Bunda Cliffs, I got into a rather funny conversation with a retired couple driving in the opposite direction. We traded stories for almost an hour. Pity it was 9am at the side of the road, and not 9pm inside a cosy bar! I knew I had met kindred spirits when they started a story with “…..one time we went to get the papers and decided to take the motor home as it had been parked up for months. We came back 2 days later, the shop was only round the corner……” I could have listened to them all day, but I eventually made my way down the path to see the cliffs.

Early explorers in their boats were greeted by the sheer wall of the Bunda Cliffs, rising between 40m- 80m above the tide mark. Extending along the coastline for 800km, they mark the edge of the Australian continent and that of an ancient raised sea floor. The white coloured rock near the base of the cliffs is called Wilson Bluff Limestone and it was formed on the seabed between 38 and 42 million years ago. There are a number of points to see the cliffs close to the road and I stopped more than once, never found the company as amusing elsewhere though.

At the Head of the Bight however, there was company of a different nature. Stimulated by seasonal cycles, Southern Right Whales leave the waters of the sub-Antarctic for their breeding ground in the coastal waters of the Great Australian Bight, arriving typically in May each year. The groups often in include pregnant whales and calves travelling north for the first time. From May – October each year anywhere between 30 – 60 whale calves are born here. 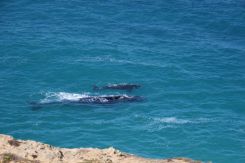 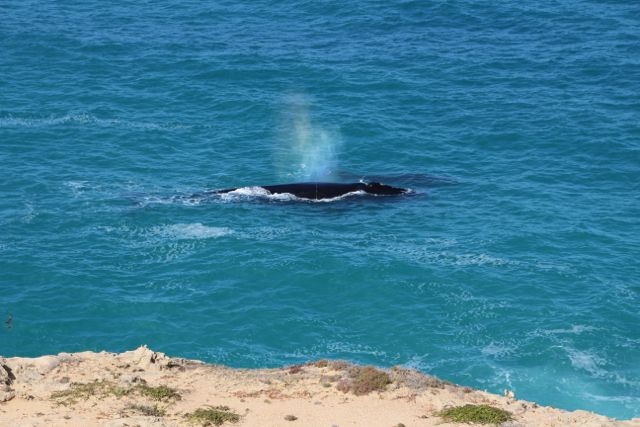 Hard to get scale from the photographs but these whales were massive! Southern Right Whales can grow up to 18m in length, and the tail often extending as far wide as 5 metres. Not sure of the exact sizes of what I saw, was just happy to see them frolicking about. I also learnt some new things about whales today. Skyhopping is when whales lift their heads out of the water to observe their surroundings. Another is that lifting the tail out of the water and slamming it down on the surface with a resounding clap is called a Tail Lob. Now you know too. There wasn’t much of either happening this morning though, they were instead choosing to meander about below the cliffs. Amazing to be so close to this endangered species in their natural environment. Sure beats a petrol station for a rest stop on the road.