In October there was a long weekend so a friend and I headed off to tackle a track in the Blue Mountains over 3 days /2 nights. Although it’s within 90 minutes of Sydney I don’t know the Blue Mountains very well. As is often the case…..what’s on your doorstep doesn’t always hold the same appeal. This trek however proved to be an adventure!

We combined the the Mt Solitary track with the Kedumba Valley circuit, only 33.8km not long, but with multiple steep ascents and descents and some keen scrambling.  It was rewarding.

We picked up the track at Scenic World outside Katoomba and quickly descended the Furber Steps towards the valley floor with full packs (wine & water essential pack items – in that order) We only started hiking after lunch so about 3 hours in at Ruined Castle we decided to set up camp and take a side track up to it for sunset. Day 1 was easy.

Hmmmm, about wondering why she thought coming on a hike would be a good idea!

First glimpse of a new day, with a hint of a sunrise behind the trees, Blue Mountains

Because of the short day on day 1 it meant day 2 & 3 were a little imbalanced and all the work was ahead of us. It’s a steep climb up Mount Solitary itself before heading back down to cross the Kedumba River where we camped for the night. We had originally planned to go further  earlier in the day met some hikers coming from there and they told us of their ‘awesome secret campspot’ where they had left firewood so we opted for that. It was pretty cool and I would have otherwise walked by it as it was downstream from the track and conveniently concealed. 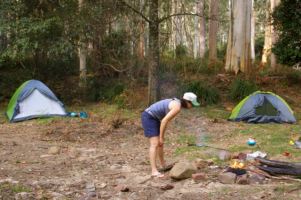 Day three was some more up down up down. Although the wine was drank and the water was low so the pack was much lighter but the legs were getting tired. I think Louie was 50 paces ahead of me for most of the day so my views mainly looked like this……. 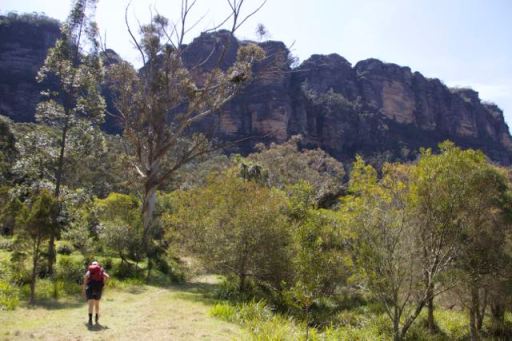