It’s official I have checked in at the Heartbreak Hotel! I’m not sure acting as a signpost for toilets is what Elvis would have envisaged as a tribute, but it is the Heartbreak Hotel at Cape Crawford. Quite a funny spot, nearly all of God’s creatures are here and I was even offered a job! But I wasn’t there for Elvis, instead I came to see the Lost City. This is 1 of 3 in Australia and in this case a little difficult to access so chose to see it from the air.

Here’s me with my new mates just before take off. Both are members of the Blue Knights Bike club touring around Oz for 6 months.

I was so busy taking it all in that it was hard to take photographs at the same time, but hopefully the shots will give you a flavour. Also nice to have a change of perspective, but quite hard to hold the camera steady when there’s no doors on the helicopter,  it had great seatbelts Mum!

Some info on the Lost City:  It is thought the rocks took 1.4 billion years to make, the formation being one of the oldest in the world — twice as old as Uluru. They are 97-percent silica sand called Abner sandstone. The outer crust holding the sand together is a combination of silica, calcite, lichens, manganese and iron, which is the most dominant mineral. The Lost City covers eight square kilometres and the whole area was once an inland sea. Water penetrated the rock and eroded it in a process called pseudokarstic weathering, breaking it into columns.

Now you have learned something new today, well I did anyway!

Up up in the air, Cape Crawford 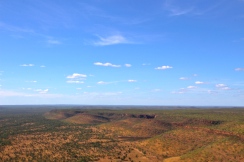 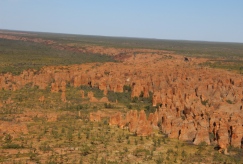 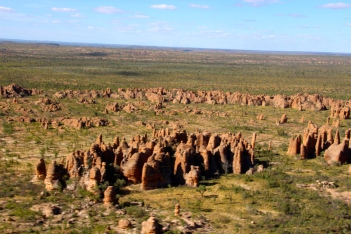